Say hello to the 'Public Transport Association of Canberra' or 'PTCBR'.

Light railers, the following announcement is a little delayed in its release, but I'm sure you'll appreciate the wait.

Following on from our success in helping to secure a light rail future in Canberra, a question was raised amongst a few of us on the ACT Light Rail committee about where we should go from here. The consensus reached was that we should continue our advocacy, not just for light rail, but also for overall better public transport in Canberra and our immediate region.

To that end, a brand new community based public transport advocacy group has been created with members drawn from ACT Light Rail, and a few new faces. We have now formally registered the 'Public Transport Association of Canberra', or 'PTCBR'.

An interim committee has been formed, a constitution written (we are using the model rules, as recommended by the Office of Regulatory Services), and a set of objectives established. The organisation has been registered with the ACT Governments Office of Regulatory Services and in the New Year we will be in a position to start inviting applications for membership, and for those so motivated, several positions on the interim committee that remain vacant.

Along with the formation of PTCBR, we'll be starting a brand new website at ptcbr.org and changing the name of the facebook group to recognise this change from a focus on light rail to better reflect a bigger focus on public transport in Canberra.

This website will no longer be updated, but remain online for future reference.

Our objectives as an organisation will be as follows:
1. Promote public transport in the Canberra region.
2. Act as the peak body for public transport consultation in the ACT.
3. Further the integration of light rail, bus services and active transport within the ACT.

Whilst we won't be asking every member of the group to join the official organisation, we are keen for as many of you as possible to do so. The more people we count as members, the greater sway we'll have to effect better public transport and planning outcomes.

We will be asking people who wish to become members to pay a $20 annual membership fee, or $10 for students/pensioners.

Your fees will enable us to hold regular public forums where we intend to invite organisations, businesses and government departments involved in public transport to come and speak with us. We intend to become a proactive voice in Canberra’s public transport and planning future, and we need to do this in a professional and organised way.

You are of course welcome to remain in this group and continue contributing as you see fit without any further commitment, and we likewise understand if you no longer wish to be a part of the group following this change.

What we can say, however, is that becoming a member of PTCBR will provide you with the opportunity to become a part of a group that will have a real, tangible impact on the quality of our city's livability. It would be great if you could all be a part of it.

Damien Haas, Chair PTCBR
(on behalf of the PTCBR Committee)
Posted by D.C. Haas at 16.3.17 No comments:

ALP and Greens form agreement to govern for the new Assembly - light rail a key initiative both can agree on.

Congratulations to the ALP and the Greens on reaching an agreement to govern for the new Assembly. This is the third term in a row that the ALP and Greens have supported each other in the Assembly, and the second formal agreement. At the election on October 15, the ALP claimed 12 seats, the Greens 2 and the Canberra Liberals 11. Greens MLA Shane Rattenbury will take a position in Cabinet as part of the agreement.
For this term of government, there are 77 separate initiatives in the agreement that both parties can agree on. The primary initiatives of interest for this group are those related to public transport.
A link to the full parliamentary agreement is here.
ABC Online reported on the agreement here.
The Canberra Times reported on the agreement here.
In the 2012 to 2016 term, the agreement to govern delivered signed contracts and construction for Capital Metro light rail Stage One, and the delivery of the Light Rail Master Plan.
In this term, the agreement refers to 'Building an Integrated transport network' with a focus on light rail Stage Two improving bus services, looking at new transport technologies and promoting Active Travel.

This simple graphic indicates that light rail is a vote winner. Look at the percentage of the ALP primary vote by polling booth on this map with primary vote numbers from booths overlaid on to a map of Canberra. The proximity of a booth to the light rail route correlates to a 10-15% primary vote gain.

How will the data on this map change when in the 2020 Assembly election light rail from Gungahlin to Civic is operational and Woden route construction may be underway? Only more positively for the parties that support light rail. 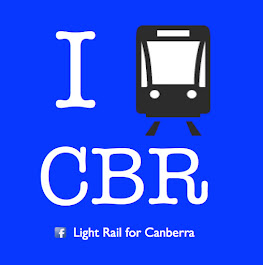 Join us and engage in robust discussion with over 1300 members on our Facebook page: Light Rail For Canberra

ACT Light Rail are the peak light rail lobby group in the Australian Capital Territory. We have members from Community Councils, all political parties, environmental groups and members of the general public.
We believe that light rail offers the best form of mass transit for the ACT, and will serve as the backbone of an integrated public transport system incorporating bus's, park and rides, bicycles and active transport.
The ACT Light Rail committee meet regularly to discuss public transport matters of interest and determine our lobbying activities. We hold public meetings on a regular basis.